The university city of Aberdeen is located on the North Sea in the far north east of Scotland. This is the third largest city in Scotland (after Glasgow and Edinburgh). Aberdeen is known as a university city and is also called the “Granite City” or the “Gray City”. These names refer to the many gray granite buildings of the city. The “Silver City with the Golden Sands” is also used to describe Aberdeen, of course this name refers to the beauty of the city and the golden beaches. You can enjoy a beach walk in Aberdeen, but also a visit to one of the following 10 sights.

The Gordon Highlanders Museum is located on the west side of Aberdeen city center. Here you will find all kinds of information about 200 years of wars, from Napoleonic to contemporary wars. There are also temporary temporary exhibitions in the museum and a museum with a souvenir shop and a tearoom, where delicious coffee, tea and other delicacies, including delicious scones, are served.

The largest shopping mall in Aberdeen is Union Square. Located on the south side of the city center, it has 50 stylish shops, a number of restaurants, cafés and Aberdeen’s largest cinema. Fashion shows and other parties also regularly take place in this luxurious shopping center.

A new University Library was opened in 2011: the Sir Duncan Rice Library. It is located north of the city center, on the campus of the University of Aberdeen, which also houses King’s College (number 6 on this list). The Sir Duncan Rice Library is a huge, state-of-the-art building designed by the Danish firm Schmidt Hammer Lassen architects. It consists of an area of ​​15,500 m² spread over 10 floors. The building serves as a cultural center and meeting place for university students, but the residents of Aberdeen (and tourists) are also welcome. One of the largest book collections in the world is stored in this university library, including copies from the 13th century.

The Tolbooth Museum is located in the center of Aberdeen. It is located in one of the oldest buildings in the city. In this old prison you will find information about the local history and development of crime and punishments over the centuries. During a walk through the Tolbooth Museum you will return to the 17th and 18th century cells for a while. The original prison doors and windows are still present in the building.

Located north of the city center, King’s College is one of the most important university buildings at the University of Aberdeen. It is also the oldest university building. It features a chapel and a tower (the Crown Tower) from the 15th and 16th centuries. The historic building complex has the shape of a square with an inner court. A large part of the building has been rebuilt. The last wing was placed in the 19th century with a library in it. King’s college is part of the campus, which consists of an area of ​​350,000 m². Two thirds of the city’s university buildings and student facilities are located on this site, including the Sir Duncan Rice University Library (number 8 on this list)

The impressive His Majesty’s Theater is located on the edge of Granite Park, in the center of Aberdeen. This is the largest theater in northeastern Scotland. It has beautiful halls and can accommodate more than 1,400 spectators. If you want to know what performances are being played, you can check the program of His Majesty’s Theater in advance.

The Maritime Museum is located on the historic Shiprow Street in Aberdeen city center. This is located in a number of important buildings, including a former church and one of the oldest residential houses in the city. In the museum you will find the story of Aberdeen and its long relationship with the North Sea. You will find information about shipbuilding, fast sailboats, fishing, oil industry (from the North Sea) and the history of the port of Aberdeen. From the museum you also have a beautiful view of the harbor of the city. There is also a collection of toys in the Maritime Museum, both educational and recreational.

The home base of Aberdeen FC football club is called Pittodrie Stadium. This is located just northeast of the center, near the coast. More than 20,000 spectators can take a seat at the stage. The Pettodrie Stadium is the largest stadium in Scotland. If you want to attend a FC Aberdeen home game, check in advance when they should play. There is more to do in the field of sports near the stadium. There is also a Golf center, a large sports center (Aberdeen Sports Village) and an Aberdeen Foodball Club Shop.

The 14th-century Sint Machar Cathedral is located north of the center of Aberdeen, on the edge of Seaton Park. It features a wooden ceiling decorated with 48 heraldic weapons from European kings, Scottish nobles and Scottish clergy. The stained glass windows were placed in the cathedral in the 19th and 20th centuries. They are made by famous Scottish artists and show stories and legends, such as those of Michael and the dragon. The Sint Machar Cathedral is nowadays used as a parish church. 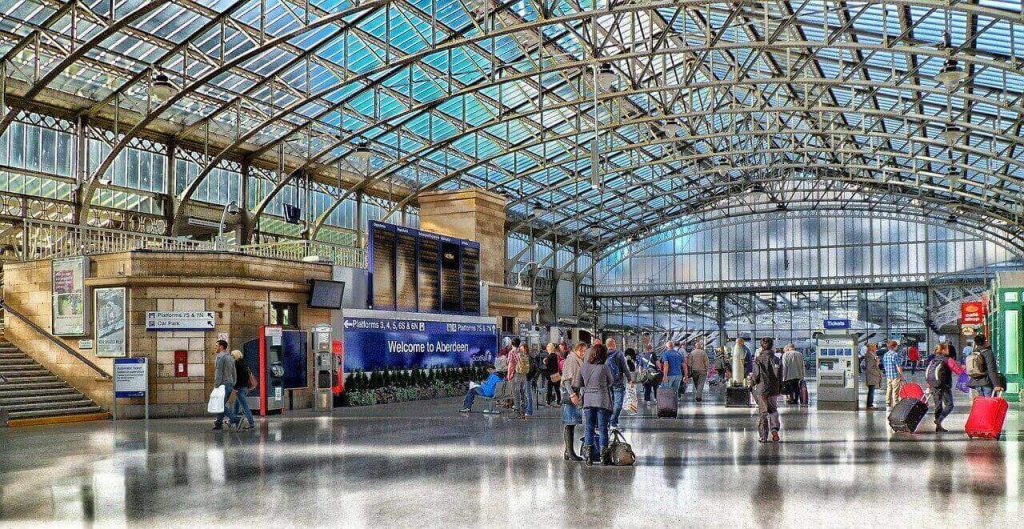